Chompazoids are a species of non-humanoid Cybertronians. Chompazoids have a physical features of dog-like creatures, having large head with powerful jaws that can help them devour metal.

Finally captured after devouring Nuon City in its entirety, the Chompazoid Underbite was imprisoned in stasis on board the Alchemor, and escaped when the ship crashed on Earth. He landed close the shipwreck, and encountered the Autobot Sideswipe and human Russell Clay, who he attempted to smash after some bragging.

Lured by the sheer amount of high-quality metal in nearby Crown City, he made his way there, but found his batteries running dry after fighting multiple Autobots, with nothing but organic forest between him and his prize. He was lured away from the city with a trailer-full of tasty-looking Billy the Breakfast Beaver metal statues, and with some help from the dimensionally-displaced Optimus Prime, was recaptured.

He was later recovered from the Autobot base by Steeljaw and Minitron, and became a member of Steeljaw's Pack.

When the Pack helped Megatronus escape his reality and come to Earth, Underbite attempted to flee the first Decepticon's wrath, only to end up facing off against an even larger contingent of Autobots, and the entire Pack (except for Steeljaw) was captured and put in stasis.

Glowstrike and Scorponok employed a pair of Chompazoids as guard-dogs for their command center inside the wrecked stern of the Alchemor. The pair snarled at Kickback as he tried to get passed them until they let him go when he was called on by Scorponok to come in the room.

Chompazoids are a ravenous species, always looking for food. Much like Scraplets. Except they are known to eat other things besides metal. Chompazoids also gain a temporary power boost from ingesting metal (either metallic alloy or pure metal). They seem to have big mouths and lots of teeth. However, Chompazoids do not eat nonmetal materials, since it will decrease their power ups and plastic in particular will make them sick. It will also make them weaker and slower.

In Season 1,  Underbite is the only known and listed Chompazoid.

In Season 2, there are two Dog-like Chompazoids that appear in Metal Meltdown. (One golden and one red). 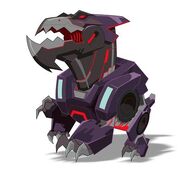 Underbite in all his glory

Add a photo to this gallery
Retrieved from "https://transformers.fandom.com/wiki/Chompazoids?oldid=456406"
Community content is available under CC-BY-SA unless otherwise noted.