Crosshairs (クロスヘア, Kurosuhea?) is a character introduced in the Transformers: Age of Extinction movie. Some might call Autobot paratrooper Crosshairs overcautious. Others might call him a huge pain in the skidplate. But Crosshairs knows that he controls a vast armory that could be incredibly dangerous in the wrong hands. Thus, he sees it as his duty to protect it with his impenetrable filing system and his incessant demands for request forms - in triplicate.

Crosshairs demands that every round of ammunition used be accounted for. He is extremely careful in his targeting, not wanting to waste a single shot. His rate of fire is slow, even in the hottest combat, but his incredible accuracy more than makes up for it.[1]

Crosshairs was among the Autobots who went into hiding on Earth when Harold Attinger's Cemetery Wind began hunting down the Autobots. Crosshairs had joined up with Drift, Hound, and Bumblebee, and the group remained hidden until Optimus Prime returned to them. Crosshairs expressed joy and faith when their leader returned, saying he always believed he would, but still grumbled about the treatment of the Autobots at the hands of the humans. Crosshairs, along with Hound, immediately tried to kill Cade Yeager, Tessa Yeager, and Shane Dyson, but Optimus restrained him, explaining their part in helping protect him from Attinger. That night, Crosshairs made known his desire to strike out on his own after Drift and Bumblebee started fighting, but fell in under Optimus as the gravity of their situation began to sink in. Crosshairs learned of Leadfoot's fate, and joined in the plan for Cade and Shane to infiltrate KSI. The group made for Chicago, where they snuck aboard Lockdown's vessel. Crosshairs initially refused to take part in the rescue mission, asking what was in it for him, but after some aggressive negotiation from Hound, joined in the mission. Crosshairs helped sabotage some of the ship, causing the anchors to release, which the humans used to escape after rescuing Tessa. He warned Hound against messing with alien creatures on the ship, to no avail. They soon found the captured Optimus, who instructed them to detach the part of Lockdown's vessel they were on for their own personal use. Crosshairs soon commandeered an Orbital Assault Carrier, using it to pick up Bumblebee and the Humans. He flew it through the skies of Chicago, fleeing Lockdown's minions until deciding to enter the fray personally, but not before instructing Cade and Shane on how to use the OAC's weaponry. Crosshairs took on many of Lockdown's henchmen upon para-trooping into the skies, and later exited the battle and regrouped with the others. Crosshairs was all too happy to leave Earth when Optimus decided they would leave permanently. He remained aboard the ship stolen from Lockdown with Drift and Optimus, but unfortunately their ride off-planet was shot down. Crashing in a nearby valley, Crosshairs decided he'd had enough of being the "underdog" and said the humans deserved what was coming for them before asking Optimus what their next move would be. Crosshairs was both astonished and annoyed that Optimus recruited the aid of the Dinobots, and retreated to the sidelines while Optimus beat some authority into Grimlock. Upon seeing Grimlock's massive dinosaur mode, he backed away in fear. The Dinobots joined up with the Autobots once Optimus "coerced" Grimlock, and Crosshairs mounted Scorn, though not without a few more grumbles about Optimus' exceptional motivational skills. Crosshairs took on many of the KSI Transformers with Scorn, and they later helped escort the Seed to safety. Lockdown's intervention threw things astray, but the battle saw the Autobots victorious. Crosshairs bid farewell to Scorn, who he had nicknamed "Spike" after the battle, and told his new friend that he'd ride with him anytime. When Optimus departed into space on his own, he ordered Crosshairs and the other remaining Autobots to protect the Yeagers from harm.

Years after Optimus had left Earth, Crosshairs had taken refuge at Cade's scrap yard with the other Autobots. He occupied his time by flying around on a small fighter craft and continued to boast his desire to be leader. When Cade, Hound and Bumblebee returned from an altercation with TRF, he proclaimed a "leader" like himself would have been far more useful than Bee. The younger bot did not take to kindly to the remark and after Crosshairs declared that Bee would never be Optimus, the argument turned physical as they began to wrestle fiercely. Later, when the Decepticons and TRF discovered where they were hiding, he and the others rolled out to a nearby town where a trap had been set. Upon arrival, Drift discovered a TRF tracking device on Bumblebee, and Crosshairs scolded the immature young bot for leading their enemies right to them. During the battle, he and Drift teamed up against the much larger Onslaught, with him blasting their enemy in the chest before Drift decapitated him. He soon shot down the remainder of the TRF drones and attempted to squish the "cockroach"/"C-3PO Ripoff" Cogman, who was harassing Cade. Instead, the surprisingly strong Headmaster grabbed his hand and twisted one of his fingers sideways, causing him to collapse in pain. When Cade and Bee chose to go to England with Cogman, Crosshairs quickly declared himself to be in charge, but that did not entail him telling any bedtime stories to Izabella. Later, when Cybertron arrived at Earth, he and the other Autobots were quite happy to see Lockdown's old ship delivered to them by Daytrader. They arrived at Stonehenge and reunited with the returned Optimus, who rallied them, the humans and the guardian knights to protect Earth. As Optimus flew off to lead the charge, Crosshairs declared his admiration for his leader, whose speeches always gave him goosebumps. En route to Cybertron, he and the other Autobots were unimpressed with the intimating knights. In the final battle, he teamed up with Hot Rod as they shared an Orbital Assault Carrier and engaged the airborne Decepticons. They were eventually shot down by Infernocus but survived and joined Optimus as he rushed the control center. After the battle was won, he returned home to Cybertron with the other Autobots.

"This AUTOBOT paratrooper has a knack for catching his enemies by surprise, either by dropping in from above, or with a lightning-fast draw of his Sidearm Blasters. He's the sharpest shot on the battlefield, so the AUTOBOTS know he'll always hit his target." -Official Hasbro bio

Part of the first wave of Deluxe class figures, Crosshairs turns into a green and black 2014 C-7 Chevrolet Corvette. His rifle can store under the car. In robot mode, his arm kibble, and the his trench coat made from the wings of the car, leave articulation something to be desired. His two smaller guns store inside the trench coat.

This mold was later used for Hot Shot.

"Mister leader of the free galaxy is back! I knew you'd make it, I never doubted you!"

"...Well raise your hand if your thoroughly disenchanted with our pleasant Earth vacation..." 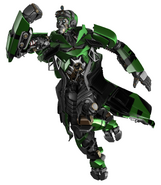 C
Retrieved from "https://transformers.fandom.com/wiki/Category:Crosshairs_(Tyran)/707.04_Delta?oldid=417211"
Community content is available under CC-BY-SA unless otherwise noted.