Teletraan I: The Transformers Wiki
Register
Don't have an account?
Sign In
Advertisement
in: Artists, Beast Wars characters, Convention exclusives,
and 4 more

View source
The name or term Buzzsaw refers to more than one character or idea. For a list of other meanings, see Buzzsaw (disambiguation).

Buzzsaw is an artist—rather, he likes to make art out of his victims. He approaches his victims with reasoned clarity and sophistication, gutting them with what he believes to be inspirational precision. However, his ego is easily wounded, and he's not adept at improvisation. If one of his "masterpieces" is interrupted and he cannot proceed as planned, he would rather retreat to sulk than rethink his approach. 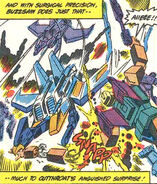 Buzzsaw was among Megatron's attack party which ambushed the Autobots aboard the Ark, crashing on Earth 4 million years ago. When the Autobots and Decepticons were revived in 1984, Buzzsaw was given the alternate mode of a gold cassette tape. He aided the Decepticons in the building of their new base constructed of parts from Harrison Nuclear Power Plant and joined in their attack on Sparkplug Witwicky's auto repair shop.

When Starscream fired upon his teammate Ravage for eavesdropping on his plot to overthrow Megatron, Buzzsaw and the other Decepticons sought deadly revenge on the Decepticon Air Commander. The Enemy Within!, part 2 Though Starscream escaped, the Decepticons soon regrouped to attack the Ark. Laserbeak was the first casualty of the raid, which Buzzsaw quickly reported back to Megatron, but their battle was ended prematurely when Auntie, the Ark's computer system, magnetized the walls, immobilizing both factions. Raiders of the Last Ark Buzzsaw also travelled with the Decepticons to the United Kingdom, where he and his teammates attempted to take control of the Man of Iron's ship. When Jazz fired upon the ship, destroying it, the Decepticons could no longer take the ship and learn from it the location of Cybertron, so they left. Man of Iron: The Conclusion

Though Buzzsaw can speak, he stopped displaying this ability around the time that Shockwave arrived to reverse the Autobots' seemingly final victory over the Decepticons in a desperate last stand at the Ark. After Shockwave assumed command and set up shop at Blackrock Aerospace Plant Number One, Buzzsaw would perch on Shockwave's shoulder and keep his unruly troops in line. DIS-Integrated Circuits! Buzzsaw, though unnamed, later accompanied Soundwave and most of the other cassette-tape Decepticons to aid their impostor Optimus Prime's ambush of the Autobots, though all of them were easily defeated once the real Optimus Prime was restored. Prime Time!

Unlike the Seekers, Soundwave, Buzzsaw, and the other animal cassettes remained more loyal to Megatron than to Shockwave, and so when the former Decepticon leader was discovered in a coal mine, they arrived swiftly to refuel and reclaim him. I, Robot-Master! (Meanwhile, Buzzsaw also supported Shockwave, including his unsuccessful plot to kidnap and brainwash Bumblebee into being a Decepticon. Plight of the Bumblebee!) One of Megatron's first acts upon returning to the Decepticons was to attack the Ark while seemingly all of the Autobots were attacking the Decepticon base, and he took the Seekers and all of the cassette Decepticons (minus Ravage) with him. Unfortunately, the Ark was now defended by the newly-built Omega Supreme. All of the attacking Decepticons except for Laserbeak and Megatron were obliterated. Buzzsaw's destroyed body was kept in storage within the Ark for several years. Command Performances!

Buzzsaw's body and the others destroyed by Omega Supreme were lifted from the Ark by the Constructicons while the rest of the Decepticons (now under leadership of Ratbat) ambushed the Autobots on the Moon. Totalled! Soon a civil war erupted between Ratbat's Decepticons and Scorponok's Decepticons, during which Buzzsaw brutally (and literally) disarmed Cutthroat. Cold War! However, it was discovered that the civil war was instigated by Starscream to distract from his evil intentions for the Underbase. The Autobots also showed up, as part of Starscream's diversion, and the two Decepticon armies teamed up to destroy them. Just before strafing Swoop, Buzzsaw cannon-blasted Omega Supreme. However, he had little time to celebrate what may be the single most lop-sided takedown in Transformers history, as he was destroyed by the Underbase-powered Starscream soon afterwards. So it goes. Dark Star!

Buzzsaw and Laserbeak strafed Bumblebee and Spike Witwicky on the roof of the Constructicons' newly-constructed skyscraper in New York City. City of Steel Buzzsaw was also recruited when the Decepticons teamed up with the Sub-Atlanticans to conquer Washington, D.C., but the Dinobots arrived and shot him with missiles. Atlantis, Arise! Soundwave unleashed Buzzsaw and Laserbeak at Jazz and Inferno when the Decepticons teamed up with the Insecticons to take the Nova Power Plant for its energy, but both were blasted out of the sky. The Insecticon Syndrome Buzzsaw later trapped the Autobots inside their bunker behind a pile of rubble, allowing Rumble to get close enough to steal the Negavator, but eventually the Autobots got free and the Decepticons were driven away. Auto Berserk

While searching for the Matrix, Soundwave ejected Buzzsaw and Laserbeak to fight Hot Rod. Hot Rod was rescued by Blaster, prompting Blaster and Soundwave to fight to the death. Buzzsaw, Laserbeak, and Ratbat gathered Soundwave's scattered remains and escaped to the Decepticon base on Chaar. The Mystery of Planet Master There, Buzzsaw met with the rest of the Decepticon cassettes, and at Galvatron's instruction, used technology borrowed from Scorponok to rebuild him into Soundblaster. As Soundblaster came to life, Buzzsaw and the others cheered. Likewise, the Autobots rebuilt Blaster into Twincast, who travelled to Chaar to face Soundblaster again. Entering the Decepticon base, Twincast encountered Buzzsaw, Laserbeak, and Ratbat, so he ejected Eject, Rewind, Ramhorn, and Steeljaw to fight them. Operation Cassette

Buzzsaw and the rest of the cassettes gathered over a comedically-defeated Soundblaster (at the hands of Chromedome) as Sixshot announced his intent to defect from the Decepticons and travel the universe.

Buzzsaw was identified in supplemental materials as being part of Shockwave's Decepticon faction during the Dark Ages, and as being part of the Nemesis crew that crash-landed on Earth four million years ago. However, he was never actually depicted in the comics.

Devil's Due G.I. Joe vs the Transformers comics continuity

Buzzsaw was part of the army of Decepticons that surrounded Teletran 3 while several of the building's inhabitants were thrown into various Earth historical periods. G.I. Joe vs. the Transformers II issue 2

Buzzsaw was seen again on Cybertron as part of Serpent O.R.'s invading forces. The Art of War, Part 3

Timelines: Dawn of Future's Past

At the end of the great war, most Decepticons who were granted amnesty simply retired and vanished from public life. So too would have been the fate of Buzzsaw if not for the intervention of the Predacon Divebomb. Divebomb granted Laserbeak, Buzzsaw, and Ravage a new lease on life, rebuilding them into members of the new faction of Predacons.

Predacon Megatron's theft of the Golden Disk was closely watched by Divebomb, who sent Laserbeak and Buzzsaw to ensure Megatron and his rogues reached their destination. Their ship intercepted the Axalon, pummelling it with missiles. Before it could come back for another pass, it was fired upon by the Chromia 10, giving the Axalon enough time to restore enough power to return fire and completely destroy Laserbeak and Buzzsaw's ship, with the pair inside. Dawn of Future's Past

Coming only with the Hasbro release of Soundwave (the Japanese version had Rumble instead), Buzzsaw transforms from a microcassette to a robotic condor. His cassette mode can fit into the tape compartment of the Soundwave and Blaster toys.

This mold was also used to make Laserbeak, Garboil, and Sundor.

Buzzsaw's first Japanese release was in a multi-set with Skids and Sunstreaker. Like all Japanese cassettes (and all future Japanese releases of Buzzsaw), he came with a clear-plastic tape case to be "stored" in.

During Headmasters, Buzzsaw saw re-release as a pack-in with Soundblaster. This version has a new sticker featuring Fortress Maximus' weak spot, revealed through the clear-red tape-doors of the Soundblaster and Twincast toys.

The Headmasters version of Buzzsaw was included in the Soundblaster reissue, though this time the duo also came with a similarly-sticker-altered version of Ravage.

A redeco of the Energon Divebomb mold, Buzzsaw gains a humanoid mode along with his robot-falcon form. He came with a set of clear-indigo energon weapons that could combine to form a large blade, plus an indigo energon chip. He was available only in a "souvenir" 2-piece set with Laserbeak, sold at BotCon 2006, and limited to 500 pieces.