Bumblebee is an American science fiction action film directed by Travis Knight with a screenplay by Christina Hodson. It is the sixth installment in the live-action Transformers series, serving as a prequel to Transformers. The film centers around the titular protagonist Bumblebee. The film stars Hailee Steinfeld as Charlie Watson, John Cena as Agent Burns, Jorge Lendeborg Jr. as Memo, John Ortiz as Agent Powell, Jason Drucker as Otis Watson, and Pamela Adlon as Charlie's mother. It was announced on December 3rd, 2018, that Dylan O’Brien will be providing the voice for Bumblebee. [1]

Bumblebee is the first film in the franchise to not be directed by Michael Bay, though he will still stay on board as a producer. It is released on December 21, 2018, by Paramount Pictures [2].

20 years before the events of the first film, in 1987, Bumblebee takes refuge in a small California beach town junkyard. A teenage girl learns that it is no ordinary Volkswagen Beetle.[3]

On Cybertron, the Autobots, led by Optimus Prime, are on the verge of losing their civil war with their enemies, the Decepticons, and begin making preparations to leave the planet. The Decepticons ambush them during the evacuation, and Optimus sends a young scout, B-127, to Earth in order to set up a base of operations where the Autobots can regroup. B-127 reaches Earth alone in 1987, crash-landing in California and disrupting a training exercise being conducted by Sector 7, a secret government agency that monitors extraterrestrial activity on Earth. Sector 7 Colonel Jack Burns presumes B-127 to be a hostile invader and attacks, driving B-127 into the forest, where he is then ambushed by the Decepticon Blitzwing. When B-127 refuses to reveal Optimus's whereabouts, Blitzwing spitefully tears out his voicebox and damages his memory core; despite this, B-127 manages to kill Blitzwing before collapsing from his wounds. Before entering stasis, B-127 scans and transforms into a nearby 1967 Volkswagen Beetle.

Charlie Watson, a teenage outcast traumatized by the death of her father and resentful of her mother Sally for remarrying, finds B-127 in his Beetle form in a scrapyard belonging to her uncle Hank, who gives it to her as a birthday present. Upon starting B-127, Charlie unknowingly accidentally activates a homing signal that is detected in space around the surface of one of Saturn's moons by Decepticons Shatter and Dropkick, just as they are in the middle of interrogating the captive Autobot Cliffjumper. After brutally killing him for defiance, the pair head to Earth, where they masquerade as peacekeepers to persuade Sector 7 to help them find and capture B-127, whom they deceive into thinking is a dangerous traitor and criminal..

Meanwhile, Charlie revives and befriends the amnesiac B-127, whom she nicknames “Bumblebee” and teaches him how to communicate through his radio. Together, they unlock a message from Optimus urging Bumblebee to defend Earth in their absence, which restores some of his memories. Bumblebee is discovered by Charlie's neighbor Memo, who agrees to protect their secret due to his feelings for Charlie. Left alone, Bumblebee accidentally destroys Charlie's living room and causes an energy spike that attracts Sector 7's attention. When Sally blames Charlie for the destruction, Charlie angrily leaves with Bumblebee and Memo, only for the group to be intercepted by Sector 7, Shatter, and Dropkick. Bumblebee is captured while Charlie and Memo are returned home. Charlie finally expresses her pain over her father's death and makes amends with her brother, who helps Charlie follow Burns to the Sector 7 outpost where Bumblebee is being held. Shatter and Dropkick torture Bumblebee into revealing the Autobots’ whereabouts and leave him for dead after revealing their plan to bring the Decepticons to Earth. Powell is killed before informing Burns the truth about Decepticons. Charlie revives and restored the rest of Bumblebee's memories with one of Sector 7's high voltage guns. After fighting past Burns' obstruction and attempt to re-secure Bumblebee, the pair set out to prevent Shatter and Dropkick from contacting the Decepticons with a beacon. Burns and his men also attempt to stop Shatter and Dropkick, but Shatter destroys their helicopter and nearly kills Burns, who is saved by Bumblebee.

Bumblebee kills Dropkick and Charlie deactivates the Decepticon beacon, causing an enraged Shatter to pursue her. Bumblebee causes a flash flood by puncturing a dam wall, crushing Shatter under the rubble, before being rescued by Charlie. Realizing that he had been wrong about Bumblebee, Burns buys them time to escape before the army arrives. Charlie, realizing that Bumblebee has a greater purpose on Earth, tearfully parts ways with him. After saying goodbye, Bumblebee scans a 1977 Chevrolet Camaro and drives away. Charlie returns to her family while Bumblebee meets up with Optimus Prime, who is disguised as a red 1977 Freightliner semi truck, as more Autobots arrive on Earth. At last, Charlie repairs her father's old car and drives along the street in California.

On February 12, 2016, it was announced that the sixth film in the Transformers series Transformers 6 would be released on June 8, 2018, while later it was revealed that the film would be an untitled spin-off, featuring Bumblebee. On November 11, 2016, Deadline reported that Paramount Pictures was moving forward with the project by revealing that Christina Hodson had written the script for the spin-off, and she was one of the female writers Paramount and Michael Bay hired in the "writers room." On March 2, 2017, Deadline reported that Travis Knight was hired to direct the film. In May 2017, it was revealed that the film's story would be set in the 1980s, and that it would have fewer robots. In the same month, it was announced that it would be titled as Transformers Universe: Bumblebee.[7]

In May 2017, it was reported that Hailee Steinfeld was in talks for the female lead in the film, and she confirmed her involvement later in June. On July 11, 2017, Jorge Lendeborg Jr. joined the cast as the male lead. On July 12, 2017, The Tracking Board confirmed that Rachel Crow had been cast in the film. On July 13, 2017, the rest of the core cast of the film was confirmed, including Jason Drucker, Abby Quinn, Ricardo Hoyos and Gracie Dzienny. On July 22, 2017, it was reported that Pamela Adlon had been cast in the film to play Steinfeld's mother. On July 31, 2017, the film added John Cena to its lead cast along with Kenneth Choi and Stephen Schneider in the supporting cast.

On October 2, 2017, while interviewing in promotion for the home media release of Transformers: The Last Knight, voice actor Peter Cullen revealed that he would be in the film [4]. With the release of more trailers, his reprisal as Optimus Prime was known.

Principal photography on the film began on July 31, 2017, in Los Angeles and San Francisco, California, and was scheduled to finish on November 16, 2017, under the working title Brighton Falls. Instead, filming concluded 6 days earlier, on November 10th, 2017.

Later, in November 2017, the film was revealed to have changed its title to Bumblebee: The Movie, as well as having wrapped up filming.[8]

On 24th September 2018, the second trailer was released, revealing the appearance of Shockwave, Optimus Prime, Soundwave, and Ravage with Generation 1-inspired designs [9].

The movie was released in theaters in the United States on December 21, 2018.[2]

A poster at the CinemaCon 2018

Scanning a car before shutting down

"Everyone in this family is trying to be happy and all you wanna do is make things harder."

"You know, mum, just because you've moved on and you're happy with your new life doesn't mean I have..."

"I would hate anything to happen to her"

"You've got people out there that need you..."

"I gotta let you go"

"Thank you so much for giving me my voice"

"Thank you for... for making me feel like me again.

OPJECTS IN MIRROR ARE CLOSER THAN THEY APPEAR

"Old friend, you kept this planet save. Because of you, we have a future, B-127"

Charlie with her father and Volswagen Bettle 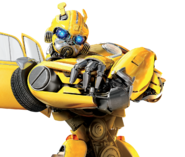 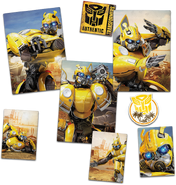