"We're not your pets and we're not your toys. We're an advanced, genius, alien race just looking for a home."

―Brains and his irony.

Brains is a drone known as the "brain unit" created by Shockwave in order to download data — but the unit decided to run away from the Decepticons. He is very smart — that's what Wheelie, his best pal, thinks anyway.

Brains and Wheelie live in a apartment in Washington D.C. with Sam Witwicky and his new girlfriend, Carly. He is also refered to as being weird and creepy to Sam and Carly, Carly says she found him in her underwear drawer.

They enjoy watching the original Star Trek series together. When an episode is on the television, they comment that it is "the one where Spock goes nuts". This is foreshadowing for Sentinel Prime betraying the Autobots later in the film. Both Sentinel Prime and Spock are both played by Leonard Nimoy.

When Sam goes to tell N.E.S.T about the Decepticons he gets restrained, the guards detect an Energon reading in the back of the car and discover Brains and Wheelie hiding in the back seat. Wheelie surrenders. Brains tries to put up a fight but gives up and unloads his shotgun then drops it before putting his hands up.

He helps Sam, Simmons and Dutch gather information on the rising situation. When Carly comes in, Bumblebee jumps and knocks down the chandler, Brains transforms and says, "That was smooth, Bumblebee!". He then proceeds to plug his "USB" hand into a printer to print out some crucial information he discovered.

Brains and Wheelie join the battle in Chicago, by hijacking a Decepticon fighter and crashing it into the larger Decepticon carrier ship, although the latter part was unintentional, as they were caught within a tractor beam. During the time they were on the carrier, they dropped some of the Decepticon fighters on Soundwave and several other Decepticons, saving Bumblebee, Ratchet, Sideswipe, and Dino and allowing Bumblebee to kill Soundwave. Later they venture into the heart of the carrier and proceed to "screw the ship up". When they finish sabotaging the carrier, which is descending towards the ground quite fast, Wheelie says "We had a nice run Brains, you and me." to which Brains replies "Yeah, we gonna die." Dark of the Moon

Dark of the Moon novel

Both Wheelie and Brains survive the crashing Decepticon ship, and swim away from the wreckage.

―Brains to Jacob after he is rescued.

Sometime after the Battle of Chicago, Brains was captured and badly damaged. He now uses his own dismembered right leg as a crutch. He was imprisoned in the KSI headquarters in Chicago, he was forced to decipher the minds of deceased Transformers so KSI could build their own robots.

"Y'all brought extinction to yourselves. Not my problem though, I'm finally free..."

―Brains to the Autobots as the group in a railway siding.

During the Autobot raid on KSI, Brains was rescued by Hound. After the raid the Autobots retreated to a railway siding. Here, Brains revealed that Megatron's mind was still active and biding his time to let the humans at KSI to build him a new body so he can reincarnate himself as Galvatron and take control of the Seed for himself. The Autobots then leave for Hong Kong, and Brains enjoys his free time by smelling the flowers. It is currently unknown if Brains will return for Transformers: The Last Knight. 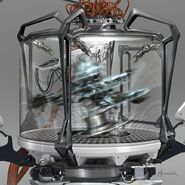 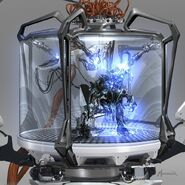 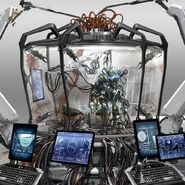 Add a photo to this gallery
Retrieved from "https://transformers.fandom.com/wiki/Brains?oldid=418497"
Community content is available under CC-BY-SA unless otherwise noted.