Teletraan I: The Transformers Wiki
Register
Don't have an account?
Sign In
Advertisement
in: Articles in need of images, Character stubs, Classics characters,
and 8 more

View source
The name or term Bonecrusher refers to more than one character or idea. For a list of other meanings, see Bonecrusher (disambiguation).

The Transformers, The Headmasters

Bonecrusher finds beauty in rubble-strewn wastelands and longs to transform pretty much any location he happens across into one. Moreover, he makes demolition into a wild performance art. He loves to show off his destructive talents for his fellow Decepticons. Deep down, his destruction is really a perfectionism that cannot tolerate anything that he views as flawed, which includes the Autobots. Megatron values the fear and destruction Bonecrusher creates as much as the resources harvested in his wake. Now if he could just refrain from destroying buildings the Decepticons actually need... 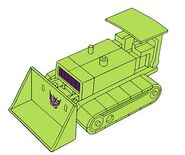 Once, Bonecrusher was convinced to join the Autobots after seeing that they had the power to raise the dead. He quickly rejoined the Decepticons, however. Carnage in C-Minor, The Burden Hardest to Bear, The Rebirth, Part 1

Four Warriors Come out of the Sky, Operation Cassette

Bonecrusher was one of the first Decepticons created on Earth by Shockwave using the stolen power of the Creation Matrix. With the other Constructicons, he was despatched along with Soundwave to construct a giant radio dish to communicate with Cybertron. When a group of Autobots led by Ironhide arrived on the scene, the Constructicons formed Devastator and managed to hold the Autobots long enough for part of the message to be sent. The Next Best Thing to Being There

Bonecrusher and the other Constructicons were again sent out with Soundwave to kidnap Buster Witwicky. Bonecrusher was intrigued by the idea of a demolition derby but soon had to turn into part of Devastator to battle a group of Autobots led by Smokescreen. The Constructicons were again recalled when Soundwave realised Buster was carrying part of the Creation Matrix. Devastation Derby

Bonecrusher was one of the few Decepticons present to defend the base from an attack by Optimus Prime and the Autobots and he and the Constructicons formed Devastator. Unfortunately, that was exactly what the Autobots wanted, since it gave them the opportunity to study the combining process. The miscalculation was enough to allow Megatron to relieve Shockwave of command. Command Performances

When Megatron set about trying to thwart Joy Meadows' attempts to paint the Autobots as heroes, Bonecrusher was among the Decepticons who accompanied him and ended up fighting the Dinobots. He helped bring down Sludge, only to be taken out of the fight by a newly-arrived Centurion. In the National Interest When Galvatron travelled back in time and briefly took command of the local Decepticons from Megatron, Bonecrusher and the other Constructicons helped him construct the cannon he hoped to use to destroy Unicron. Target: 2006

When Ratbat took command of the Decepticons, he had Bonecrusher lead the other Constructicons in breaking into the Ark while the rest of the Decepticons were keeping the Autobot factions led by Grimlock and Fortress Maximus busy. There, they managed to liberate several damaged Decepticons being held in stasis. Totalled

Bonecrusher disappeared soon after and may have been among those deactivated during the Underbase Saga.

(Note: Bonecrusher is the only member of the Constructicons who did not appear in the Earthforce stories.)

Bonecrusher was with the Decepticons when Bludgeon led an assault on the planet Earth, in an attempt to draw out Optimus Prime, and so naturally he fell back under Megatron's control when the old Decepticon commander took over. The Gathering Darkness He was seen later helping to construct the trenches and shield barriers to use against the Swarm. A Rage in Heaven!

Nine million years ago, Bonecrusher and the Constructicons helped Megatron create his world engine under Iacon, the means by which he would turn all of Cybertron into a mobile juggernaut, bringing his tyrannical message of "peace" to the galaxy at large. Construction was interrupted by Grimlock and his commando unit, however, and the engine was disabled. The War Within

During the war, the Constructicons discovered a new means of transformation and combination, turning themselves into the awesome and terrifying Devastator. The technology was appropriated by the Autobots, and soon a half-dozen or so titanic combiners were in action on both sides. Their destructive potential proved to be too much for Cybertron's fragile mantle to handle, and so by the time of the Dark Ages the Crisis Intervention Accords set down new rules of warfare, prohibiting the combiner teams from operating together on any faction. They could remain an unaligned unit or join separate factions, but the risk of combiner warfare was too great. Unfortunately, Bonecrusher and the Constructicons eventually broke that agreement, allying themselves and Devastator with Ratbat's Ultracon faction. Their resulting battle with the unaligned Defensor devastated the Tagan Heights region of Cybertron, and very nearly triggered a chain reaction that would have destroyed the entire planet. The War Within: The Dark Ages

Although they were apparently not part of the original crew of the Nemesis, the Constructicons somehow became involved in the Autobot / Decepticon skirmish on Earth in the 1980s. Like the other Decepticons, they were captured and detained by the Autobots after roughly a decade of war, and would have been transported back to Cybertron if not for the sabotage of the Ark II. Bonecrusher and many other Decepticons were taken in by the human mercenary Lazarus, who attempted to reprogram their deactivated forms into remote-controlled weapons of mass destruction. He failed. Megatron regained control of his senses in 2002, and reawakened the Decepticons under Lazarus' dominion. Combined as Devastator, Bonecrusher and the Constructicons caused significant damage to the city of San Francisco before being brought down by Optimus Prime himself. Prime Directive The pieces of Bonecrusher and the Constructicons were secretly gathered up by Earth Defense Command and held in their Roswell facility for study. Generation One issue 0

After Ratbat and the Senate began discontinuing all manual labor opportunities on Cybertron, automating the work formerly performed by Cybertronians, Bonecrusher and his construction crew found themselves out of a job. Searching for new challenges, these "Constructicons" hooked up with Megatron and the underground pit-fighting ring in Kaon. Since the combat was illegal, the gladiators could not operate out of a single arena at a set location: too much risk of being raided. Instead, the Constructicons were commissioned to create a new arena before each fight at a randomly chosen location. Using a combination of demolition, material fabrication, and surgically-skilled construction engineering, Bonecrusher and the Constructicons would convert any and all scrap available into into a new arena for the gladiators and crowd to occupy. Megatron Origin issue 2

In the modern era, Megatron and the Decepticons have begun overt occupation of the planet Earth. Bonecrusher and the Constructicons have been summoned to the wretched little mudball to supplement the available forces. All Hail Megatron

Bonecrusher turns into a bulldozer.

Bonecrusher is one of the toys included in this gift pack, a redeco of Energon Bonecrusher and Sledge.

Bonecrusher is a Generation 1 Constructicon-themed redeco of Revenge of the Fallen Legends Class Rampage, transforming into a bulldozer and the right leg of Devastator. He was only available in a Japanese-exclusive giftset with the other green Constructicons.