Teletraan I: The Transformers Wiki
Register
Don't have an account?
Sign In
Advertisement
in: Transformers Rescue Bots, Velocitronian, Autobots,
and 9 more 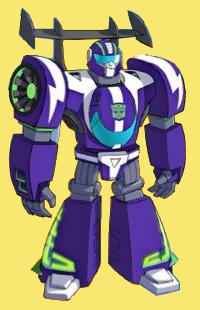 Blurr is a Rescue Bot from Velocitron who first appeared in Transformers: Exiles. He is also an ally to the Bee Team.

Blurr was long-established as one of the top racers on Velocitron when the Ark arrived there. Though initially consumed with racing like the rest of the populace, he sided with Override when the Velocitronian Civil War began.

The Blurr who appeared on Earth apparently left Velocitron in the company of a loader named Salvage, or else was a different one entirely from the one encountered by the Ark Crew. He claimed to be the "fastest racer in the galaxy" and a former winner of the Cybertronian 500. He and Salvage were the crew of a ship that crash-landed on Earth due to a meteor shower. Upon encountering several primitive humans, Salvage became determined to help them escape the shower, but Blurr was more interested in his own self-preservation and returned to their ship after lying to Salvage. Salvage later came looking for him, and upon finding him trying to launch the ship again the two ended up in a fight. A cave-in forced them both to go into stasis, and they were eventually awakened by Rescue Force Sigma-17.

After learning that Salvage had lost his memory of events following their crash-landing on Earth, Blurr claimed to have saved both him and the cave people tribe. After scanning an Earth race car for an Alt-Mode, his attitude began to wear on his fellow Cybertronians, and the ship's memory log revealed the true history of events. Despite this, the Rescue Bots offered him a chance to serve with them, but he ended up stealing their ship, the Sigma, and departing. However, upon receiving a transmission indicating that his comrades were in danger, Blur chose to return and help out. He and Salvage were then formally appointed as Rescue Bots, but reassigned to work in an area other than that of their mentors.

Blurr and Salvage would then join a group of Rescue Bot trainees overseen by High Tide, an old friend of Optimus Prime's. They later participated in a massive rescue operation when Griffin Rock, the adopted home of their fellow Rescue Bots, was teleported to the Arctic and had to be flown back to its original position.

Blurr made his first appearance in Blurred. During a practice run, Blurr intercepted a plane's distress call that led him to the Bee Team where he helped Sideswipe. After rescuing the pilot and retrieving Ragebyte's stasis pod from one of Windblade's caches, a starstruck Blurr accompanied the team home, much to Sideswipe's chagrin. Fearing Blurr would replace him, Sideswipe attempted to prove his worth alone; however, the pair ended up working together to take down Ragebyte. Blurr took Ragebyte's bomb and located it so it exploded in an abandoned area. Contrary to Sideswipe's fears, Blurr became his intern rather than his replacement.

In Sphere of Influence, Blurr continued to work with the team, taking part in the capture of Zorillor. He and the rest of the team found themselves drawn to possess the Sphere of Doradus, thanks to the energies it gave off, until Springload made off with it, and it was smashed during their capture of the Con.

In Bee Cool, with his own team wanting him back, Blurr did some last minute training with Sideswipe, but was again called on to help capture Dragstrip and Wildbreak in West Rock. After the unsuccessful conclusion to that mission and his idea of hiding the weapons for the team turned out to be successful, Blurr returned to his Rescue Bot duties

On Velocitron Blurr was obsessed with racing and known for his rapid speech, but he was lucid enough to recognize that there were more important things.

The Rescue Bot Blurr was somewhat self-centered, putting his own concern and well-being above others. He was willing to lie in order to fit in with others, and slow to accept correction or take orders. Despite his poor attitudes in some regards, he has good intentions, and responds well to encouragement and the opportunity to be of help to others.

Blurr and Sideswipe are after Bounce.

Who ordered the fish?