Blue Bacchus is Black Shadow’s villainous partner in crime. He is a scheming and maniacal madman. Like his accomplice, he enjoys causing general mayhem for fun and profit. 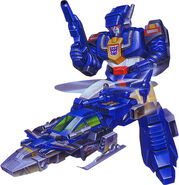 Blue Bacchus is an outer space gangster who was seen causing trouble along with Black Shadow on the planet Micro, but both were defeated and run off by Greatshot. Planet Micro - The Mysterious Warrior

Retrieved from "https://transformers.fandom.com/wiki/Blue_Bacchus?oldid=484858"
Community content is available under CC-BY-SA unless otherwise noted.