Black Shadow is a vile gangster. He does most things people would expect from a nasty scoundrel; he robs, extorts and kills for hire. His partner in crime is Blue Bacchus, a gunman with a similar personality and moral fiber. 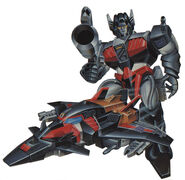 Black Shadow is an outer space gangster who was seen causing trouble along with Blue Bacchus on the planet Micro, but both were defeated and run off by Greatshot. Planet Micro - The Mysterious Warrior

Last Stand of the Wreckers

Black Shadow was present, along with Sixshot when Overlord challenged Megatron. He only spoke once, saying "For the Decepticons!"

More Than Meets The Eye

After selling his services to the Autobots, Black Shadow was hunted down by the Decepticon Justice Division and brutally tortured for his crime until dead.

Black Shadow is a redeco of the Pretender Thunderwing, transforming into a Cybertronic jet. His outer Crossformer shell's chestplate/head piece is retooled from Thunderwing's to make it more robotic. However, it still transforms into a larger Cybertronic jet like the original version. The inner vehicle can be attached underneath the nose of the larger vehicle to create a combined starship mode. All three of his guns can be mounted on his shell's vehicle mode.

Retrieved from "https://transformers.fandom.com/wiki/Black_Shadow?oldid=484861"
Community content is available under CC-BY-SA unless otherwise noted.