Ax is an Andalite in the Animorphs continuity. 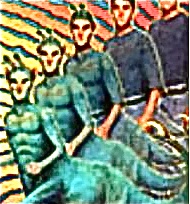 Ax is an Animorph. He's an alien! Ax is short for Aximili-Esgarrouth-Isthill.

Ax's known animal forms include a scorpion, a human, and a panther.

Ax transforms from an Andalite (a blue and tan centaur with a scorpion tail) into a scorpion. In scorpion mode his tail fires missiles. Unlike the human Animorph toys, it has no transitional third mode.

Ax's second retail toy is a retooling of Jake/Tiger, transforming from a funny-looking human into a panther, as well as a transitional third mode combining features from both. His panther mode front claws are separate pieces that attach like gloves. Although this toy has no alien mode, the transitional mode's head has features that suggest an Andalite-to-panther transition rather than a human-to-panther transition.

Retrieved from "https://transformers.fandom.com/wiki/Ax?oldid=330400"
Community content is available under CC-BY-SA unless otherwise noted.