Teletraan I: The Transformers Wiki
Register
Don't have an account?
Sign In
Advertisement
in: Articles needing citations, Combiners, Female Transformers,
and 4 more
English

View source
The name or term Arcee refers to more than one character or idea. For a list of other meanings, see Arcee (disambiguation).

Though small compared to many of her peers and adversaries, Arcee compensates with speed and aggressive maneuvers, making her one of the most dangerous Autobots around. Moreover, Arcee is a born hunter. She honed her speed hunting turbofoxes with other speedsters, challenging herself to get as close as possible before tagging them with her bow. She's a crack shot with said crossbow weapon, and Ironhide has trained her to use her speed to her advantage in battle, striking suddenly and swiftly and then vanishing away again as fast as she appeared.

The events at Tyger Pax created a nagging doubt in Arcee about her abilities. She carries some guilt about Bumblebee's injuries, and part of what drives her is the desire to prove herself, not only in the optics of her friends and comrades, but most importantly in herself.

Arcee was one of a handful of Autobots under the command of Bumblebee who desperately fought against Megatron's vast army at Tyger Pax. She was captured and interrogated by the Decepticons but survived the ordeal. She recounted to their Autobot rescuers Bumblebee's heroics in delaying Megatron, preventing Megatron from intercepting the wormhole-bound All Spark. Prime Directive #1

Millions of years later, following the death of Megatron, Arcee was in command of an Autobot assault team on Mars and led Cliffjumper and others in an attack on the Nemesis. The Reign of Starscream #2

While her team made short work of the Swindle, Dreadwing, and Payload drones the Decepticons sent against them, Arcee killed the Decepticon sniper Hardtop before he could snipe Smokescreen. Her teammates were unprepared for the arrival of Thundercracker, however, and he quickly slew Camshaft and wounded Cliffjumper. Remembering her failure at Tyger Pax, Arcee leapt into action, and soon she and Cliffjumper had Thundercracker at their mercy. The arrival of Starscream changed that, as he killed Smokescreen and Air Raid and badly damaged Cliffjumper. As she attempted to pull the last surviving member of her team to safety, Arcee was kicked aside by Starscream. The Reign of Starscream #3

However, Arcee recovered an instant later. The Nemesis was already taking off, but she jumped and grabbed onto a piece of landing gear, holding on tight. Through the space bridge. Wow. Later, she makes her way back to an Autobot facility, where she unexpectedly meets Clocker and Crosshairs. Along with a large force of Autobots, the three move in on the Simfur temple, where Starscream is using captured Autobots for a strange project of his. The Reign of Starscream Issue Number Four

After discovering Starscream intended to build an All Spark replica and infuse it with the life force of the captured Autobots and after which Dreadwing attempting to overthrow Starscream, their priorities soon became very complicated. Arcee sent a few members to the city of Trypticon to shut down the drone units while she and a few others created a distraction by attacking the Decepticons gathering below. Arcee fired the first shot in honor of Elita-One who was killed when her life force was absorbed. After they succeeded and Trypticon was destroyed, Arcee noted that Starscream was still a threat and she needed to find him (as did Thundercracker who she noticed flying off into space.

Later, the Autobot ship was shot down and she was captured by Thundercracker then given to Flatline for experimentation. Her body was destroyed and her spark was split and put into three protoforms to try and create Decepticon warriors. It didn't work out so well because Arcee regained her memories at the mere mention of Thundercracker's name. Her hatred was just that deep. With the help of a couple not so mentally sound brothers, Skids and Mudflap, they helped Arcee and her sisters escape. They all headed to Earth after receiving Prime's signal beacon. There they reunited with the main group of Earth Autobots and prepared to go after Demolisher in Shanghai. Tales of the Fallen #6

Arcee was on Earth for a short time at the beginning of the conflict there, presumably arriving shortly after Bumblebee. When the situation on Earth began to ramp up into out-and-out combat, she was reassigned elsewhere, where her stealth skills would be of more use.

Now she fights in the Charii system against a Decepticon splinter cell working on a star-breaking weapon. If she has her way, the only things breaking will be their heads.

Note: Arcee's appearance in Prime Directive is in canon with Titan.

Among other engagement to protect American infrastructure, she served with Bumblebee in protecting an Alaskan pipeline. Transformers Comic issue 16 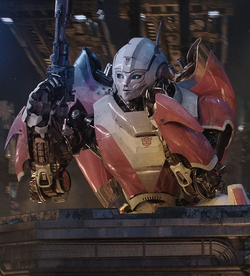 Arcee was a member of the Autobot resistance forces led by Optimus Prime. Alongside Ratchet, Ironhide, Cliffjumper, Wheeljack, Brawn and B-127, Arcee fought against the onslaught of Decepticon forces under the command of Shockwave and Soundwave. When it became clear that the Autobots were overmatched, Prime ordered all of the Autobots to evacuate Cybertron.

Sometime after the battle of Mission City, Arcee became a tripartite Cybertronian, received Optimus Prime's message, landed on earth and joined up with Optimus Prime and his crew. Arcee hunted down Sideways in Shanghai, attempting to stop the Decepticon from fleeing. Despite her speed, she did not have the power to bring him down, as a result Sideswipe was called in to finish the job.

Arcee was later shipped by the U.S. government along with other Autobots to Egypt where she, Chromia, Elita One, and Ironhide formed a team to cover Sam while he ran to the Pilars. When the team arrived to Sam and Mikaela, Elita One and Arcee were killed by Decepticon shots. It was unknown what happened to Chromia. Transformers: Revenge of the Fallen

Note: According to Roberto Orci and Alex Kurtzman, all three Arcee components were killed in the final battle,[1] thought the IDW comic prequels to Dark of the Moon say otherwise. Besides, the death of Arcee in Egypt is confirmed in Age of Extinction. Where it was drawn on one of Attiger's cards, possibly because the film ignores the appearance of the sisters in IDW comic prequels.

Arcee is a redeco of Energon Arcee, replacing her pinks and most of her whites and blacks with blue, and her translucent red with smoky brown plastic. She transforms into a "superbike"-type racing motorcycle. Unusually for a Transformer, she does not hold her weapon in her hands as most figures do. Instead, her Energon Bow mounts on a peg in her arms, with her hands being positioned to give the appearance of her using the bow. The bow itself is spring-loaded, firing a grey missile 'arrow'.

Arcee (and the rest of the Scout wave) are exclusive to Target stores, where they are all part of a Robo-Vision promotion. Arcee comes with a Robo-Vision Decoder which allows you to see the Robo-Vision Code ("BULLSEYE") printed on her cardback. Starting June 2, 2007, Target's website allowed users to input those codes to access exclusive content, a concept similar to the online Cyber Planet Key info from the Transformers: Cybertron toyline.

This mold also was used to make Superlink Ariel Paradron Type, as well as the BotCon 2005 Descent into Evil set's Chromia, Flamewar, Flareup, and the fellow Target-exclusive movieverse Elita-One.

Deluxe Arcee transforms into a pink/purple 2006 Buell Firebolt XB12R motorcycle, genericised to get around licensing issues. Arcee has references tampographed on her vehicle mode, such as her motorcycle's model name, "RC 1100", and her Massachusetts license plate marked TF7407, the original release date of the movie.

Arcee's Automorphing feature is located in her crossbow weapon (formed out of the seat/storage area of the bike), activated when the projectile (the bike's tailpipe) is inserted, which pushes out the recurved lath parts on the sides of the weapon. The rectangular peg which is supposed to be used to attach her weapon to her forearm in robot mode is sometimes a poor fit, and the weapon may pop off. As an alternative, the round peg by which the weapon is attached in vehicle mode can also be used in robot mode, with a little rearranging of parts.

Undocumented in the instructions, the two shoulder-mounted half-wheels contain a small niche on the edge of the tires, and by folding the wheels down with the hubcaps pointing towards the chest and by turning the tires towards the shoulders, one can feel the wheels gently click into place via the tire niches and hidden tabs in the shoulders, allowing the wheels to remain in place and more closely resemble the figure as pictured on its packaging.

As with most larger Transformers toys that become motorcycles, Arcee has a kickstand on the left side of the bike; unfortunately it's mounted so low that she will fall in the opposite direction if it is fully extended. This is what could've been used in the sequel.

A three-pack, exclusive to Sam's Club stores, consisting of redecos of Voyager Class Optimus Prime and Deluxe Class Arcee, both with a battle damage deco, and an unchanged Voyager Class Starscream.

A single deluxe figure that is the same as the battle damaged 3-pack Arcee. She is possibly only available out of the US.

This Japan-only redeco of Deluxe Class Arcee is cast in black in an attempt to match the look of the motorcycle Lennox rides near the end of the film. Surprisingly, it is not evil.

This Arcee is decoed in pink and white, in homage to Generation One Arcee, and is exclusive to the Wonder Festival 2008 Winter in Tokyo, Japan.

Unlike the first movie's toy, Arcee have the ROTF wheel design, like Chromia. Her wheel foot is off to one side, so she's always uneven, but that's how she's supposed to be. She comes with a sidecar that becomes her stand in robot mode. Her MechAlive gimmick is in her neck. By moving her head up and down, two gears in her neck spin.