Teletraan I: The Transformers Wiki
Register
Don't have an account?
Sign In
Advertisement
in: Autobots, Commanders, Males,
and 10 more

One Shall Rise, Part 1

"Take my hand Optimus and join me. Join with the AllSpark."
―Alpha Trion to Optimus Prime [src]

Alpha Trion is one of the Thirteen, co-founder of the Cybertronian civilization along with Alchemist Prime and a High Council member. Alpha Trion served inIacon to send ancient relics to Earth for Optimus Prime to find and get before the Decepticons could get their hands on them.

Alpha Trion was among the Thirteen created by Primus to battle and defeat Unicron and witnessed the activation of the Well of Allsparks. When Solus Prime was murdered by The Fallen, Alpha Trion took her Forge of Solus Prime and many other relics of the Primes after his brothers passed away. After her and Liege Maximo's funeral and the loss of many brothers to the Well of AllSparks and to space. Alpha Trion remained with Prima to begin a new society. He showed great interest in the newly spawned Orion Pax when the Well of AllSparks was first activated.

When the Quintessons invaded Alpha Trion recognized them as Quintus Prime's creations. He tried to fight back against their initial attacks and wondered what had happened to his brother after creating the first Quintessons. Alpha Trion joined Sentinel Zeta in besting the Quintessons. After they were defeated he was distressed by Sentinel's form of government and the fact that he took the title Prime.

Eventually Cybertronian society expanded out to the stars using Space Bridges. However, one ship became infected with a dreaded rust plague that swarmed through all the colonies. No cure could be found and to protect Cybertron all Bridges (save the one orbiting Cybertron) were destroyed. Alpha Trion noted that everyone seemed to lose the will to live after that. When Sentinel Prime created the caste system, Alpha Trion voiced his opinion but, Sentinel exiled him to the Hall of Records to be forgotten

Desperate for any moral boost in Cybertron, he fled to Vector Sigma and begged the computer for a miracle. It informed that his long-lost brother would one day return but in his current form he needed Alpha Trion's help. The computer gave him the "Seal of Vector Prime" to allow him to better interact with the Covenant of Primus.

He eventually found his brother in the form of Orion Pax already at the Hall of Records. Alpha Trion waited until the time was right to resurrect him.

Alpha Trion persuaded Halogen and the rest of the High Council that Orion Pax should be made the new Prime.[1]

When Optimus launched the AllSpark into space, Alpha Trion forged an indestructible container capable of extracting its pure energy form from the ether.

Alpha Trion sent many relics to Earth for Optimus to use.

One was the Star Saber in which he recorded a message about the Omega Keys and the Omega Lock. As he was launching the final key, the Decepticons stormed Iacon. Perhaps out of pure desperation, he knocked out Smokescreen and placed the final key within him, knowing he would one day reach Earth. Alpha Trion's fate is unknown as Smokescreen states that was the last time he saw Alpha Trion.

When Smokescreen was being told to behave better around humans, Ratchet asked him: "Is this what Alpha Trion taught you?" When Optimus acquired the Star Saber the recorded message from Alpha Trion played for him.[3]

After hearing his mentor's message, Optimus learned about the Star Saber, the other relics, and the Omega Lock (which he kept the Omega Lock a secret from his team under Alpha Trion's wishes). [4]

"I stand before you my student. As such, it would seem that it is your time. Why do you hesitate?"
―Alpha Trion to Optimus in the AllSpark [src]

When Optimus was about to be one with the Allspark, he was met by Alpha Trion, who asked why Optimus hesistated. Optimus said he did not fear death but feared for the fate of the Matrix. Alpha Trion told Optimus that Smokescreen would be an excellent choice for a Prime and that, despite being young, would learn how to be one, just like Optimus once did. Optimus hesitated leaving such a burden on Smokescreen, but was later restored to life, thanks to Smokescreen who revived Optimus by placing the Forge of Solus Prime on his hand. This restored Optimus in a new and stronger body.

Alpha Trion is a very calm and wise bot. He is shown to be a great teacher as he mentored both Optimus and Smokescreen. In the days before war, he was desperate to prevent Cybertron's death and tried to arrange a High Council meeting, which only created the war. This act showed Alpha Trion truly loved Cybertron. It has also been shown he is not a fighter.

Alpha Trion is a member of the Thirteen and one of the first beings ever created. As such he had enormous power over the universe and is practically a demigod. He is one of the original Primes whose name is not known to the Cybertronian public. His artifact is the Quill through which, with the Covenant of Primus, he can bend reality itself. Alpha Trion does not use this power often as he knows the future is complicated and can often change despite his writings. He can also see into the future, though not in great detail. For example, he knew Optimus would reach Earth, but he knew not the nature of the battle or its outcome or the combatants, save Optimus. He only knew that Earth was a battlefield that would decide the fate of Cybertron and that Smokescreen would join Optimus. 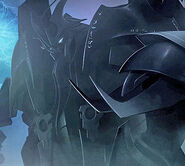 Alpha Trion in the beginning. Yes, he was a strong young lad back then.